It took time for Mark Koning to find the right cover image for his third and most recent book, Challenging Barriers and Walking the Path. First, he wanted to find a picture of himself with his dad, who died when Koning was just 13-years-old. Second, he wanted a picture of the two of them walking away on a path, à propos the book’s title.

“The beach kind of looks like a path,” Koning said. “I couldn’t find ‘a walking away’ picture.”

What he did find was a beautiful, authentically retro image of the father-son duo on a beach. The older Koning is looking up a the sky, the young boy is happily focused on his dad.

As his book title suggests, Koning has dealt with several barriers in his life. In 2001, Koning’s mother acquired a brain injury from an accident. Two years later, a neuopsychologist confirmed what Koning had suspected for a while – that he had acquired his own brain injury at the age of six, as the result of Encephalitis.

“I’ve accepted myself a lot more,” Koning said. “I am proud of how I live with [brain injury].”

Back in 1978, despite being in a coma for two weeks, and needing rehab to learn how to walk, talk and function again, Koning had no idea he had acquired a life-long disability. He struggled throughout his education and in social situations, without understanding why he was having problems. Eventually, Koning was labelled as having a learning disability and received special education support. But he says the real issue, the brain injury, was never addressed – or spoken of. 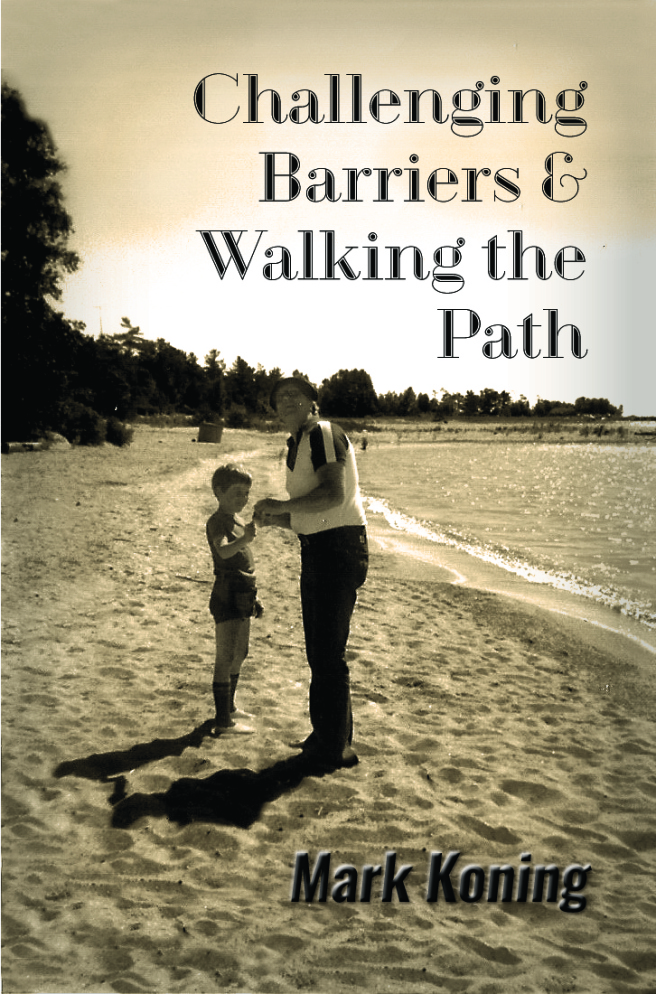 Koning writes for this blog and Neuroconnect Brain Injury and Rehabilitation magazine, has found solace in writing over the years. It was through researching a project for a writing class that Koning first thought he might be living with a brain injury.

“Since discovering I had a brain injury, there was I point where I became an advocate, I started doing videos.” Koning said. “I was on T.V., talking about brain injury.”

Koning has explored different careers, fitting in writing between work commitments and caring for his mom. After working in the hospitality industry for several years, he switched to the non-profit sector, and is currently the communications and administration coordinator at the AIDS Committee of York Region – a place where he felt comfortable disclosing his brain injury right away.

“[At times] I work more than full-time to not fall behind,” Koning said. “When I don’t stop myself [to take breaks] that’s when I fall behind.”

Koning had accessibility on his mind when publishing his book. The chosen fonts – different depending on whether it’s a flashback, an excerpt from his blog or narrative, are easy to read. Koning has also written in short paragraphs.

“Otherwise you find yourself at the end of the paragraph and have to start over again,” Koning said.

“At the heart of it, I’m still a writer,” Koning said.

To find out more about Mark Koning’s book or to purchase a copy: http://www.markkoning.com/ChallengingBarriers.html