TOPIC: Invisible Injuries – How to help your Lawyer

There are a number of difficulties Plaintiff’s counsel faces in trying to prove the existence and severity of a traumatic brain injury or a mild traumatic brain injury. One of those difficulties is that most brain injuries, unlike other injuries such as a broken arm or an amputated leg, are invisible to the naked eye. X-rays, CT scans and MRIs can detect fractures, hemorrhages, swelling, and certain kinds of tissue damage, but they cannot always detect injury to a person’s brain.

Join lawyers Nick Todorovic and William Harding of McLeish Orlando to learn what to do and how you can help your lawyer in proving your brain injury case. 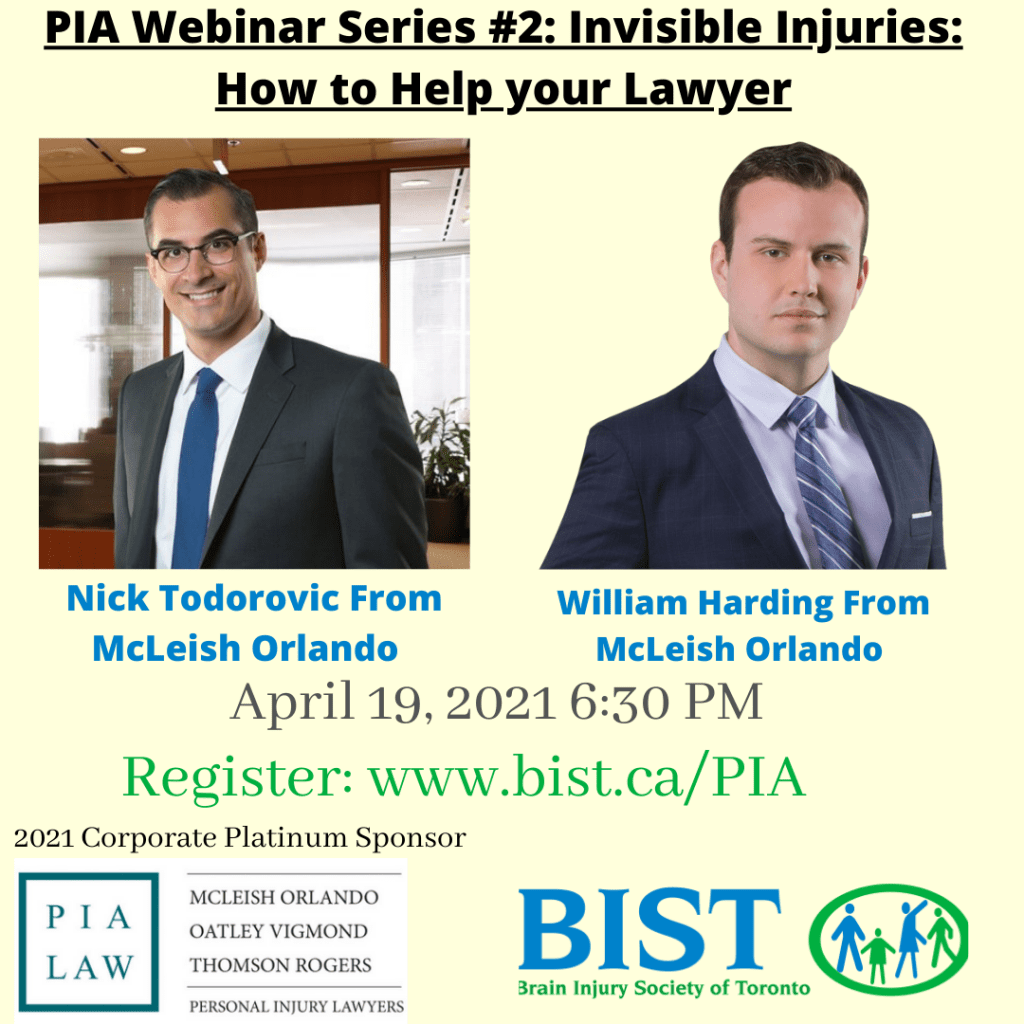 Nick Todorovic first joined McLeish Orlando as a summer law student in 2014. He went on to the article and after his call to the bar in 2016, became a lawyer on Patrick Brown’s team.

After completing a BSc in chemistry and math at Wilfrid Laurier University, Nick went on to complete his PhD in organic chemistry from McMaster University. His research was primarily in the areas of combating various forms of cancer and has been published in various peer-reviewed academic journals. Following his PhD, Nick went on to obtain his law degree from University of Ottawa. During law school, he was fortunate to gain valuable experience by working for a multinational law firm in the area of intellectual property. In addition to his academics, Nick also swam for various varsity swim teams.

After his own personal experience in dealing with an injury at a young age, Nick chose to pursue a legal career that would help others overcome adversity. This passion along with a keen sense to detail for the law has given Nick a solid professional foundation.

Nick is a member of CycleToronto and is active in Bike Law Canada.

William joined McLeish Orlando as a summer student and went on to complete his articles with the firm. During this time he assisted at a successful 3-week jury trial for a badly injured young lady. After his call to the bar in 2018, William joined Patrick Brown’s team as an associate.

William received an Honours Bachelor of Arts degree from the University of Guelph, majoring in Criminal Justice and Public Policy, and graduated with distinction. William earned his law degree from Queen’s University. Following the wrongful death of a family member, he chose to attend law school and pursue a career as a personal injury lawyer.

While studying at Queen’s, William served as a volunteer caseworker at Queen’s Legal Aid, helping members of the local community with their legal problems. For his legal work, William was awarded the McDougal-Watson Memorial Award for “excellence in file management, hard work and commitment to the achievement and development of the goals of Queens Legal Aid”. As a lawyer, William has appeared at the Licence Appeal Tribunal, the Ontario Superior Court of Justice and the Ontario court of Appeal

Thank you to our 2021 Corporate Platinum Sponsor